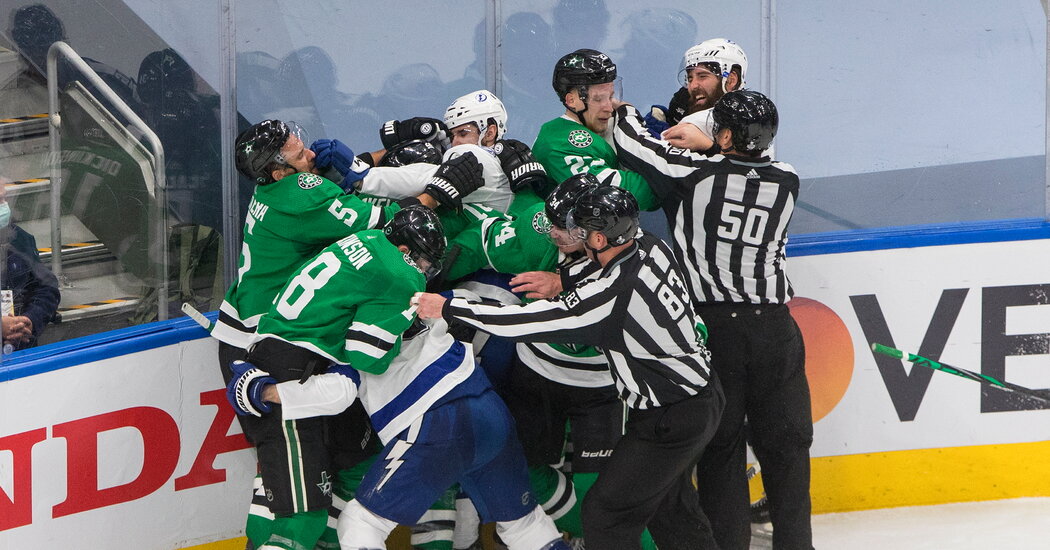 
The tortured relationship between pain, violence and sports burst sharply into view once again this month. The reminder came courtesy of a pair of reliable standard-bearers: professional hockey and football, both brimming with beauty and drama obscuring a dark side that should not be ignored.

In the N.H.L., the Stanley Cup finals are well underway. The Tampa Bay Lightning lead the Dallas Stars, three games to two, in a taut best-of-seven series that continues Monday night.

The battle for the Cup has struggled for wider attention on a sports calendar upended by the coronavirus pandemic and social strife. In a normal year, hockey wouldn’t have had to compete for an audience with a trifecta that includes the start of the N.F.L. season, the N.B.A. playoffs and playoff chases in Major League Baseball.

So the N.H.L., desperate for viewers, produced an eye-popping promotional video. It was a 1-minute-11-second montage of slow-motion game clips. Nothing about it highlighted hockey’s beauty — the pinpoint passes or unfathomable shots on goal that fuel the game’s excitement.

Instead it was a homage to misery.

“There is a price to pay in the playoffs, isn’t there?” a play-by-play announcer intones, as scenes of players suffering grievous injuries roll past. They double over and stumble on the ice in agony. They writhe in pain from laser slap shots to the gut and groin.

When a puck slices against a player at speeds fast enough to break bones, an announcer remarks, “It’s going to leave a big mark.”

Masochism on ice. What a thing to celebrate.

This tone-deaf advertisement, sent out on the N.H.L.’s Twitter account and now conveniently deleted, came from a league that has long struggled to address the toll of its brutality. A league laden with former players dealing with brain injuries, several of whom have died by suicide. A league that in 2018 paid $19 million to settle a lawsuit brought by retired players who claimed the N.H.L. hid what it knew about the long-term effects of repeated hits to the head.

Hockey has been trying to tamp down its violence for years. But during this year’s N.H.L. playoffs, the floodgates have opened again. A fight broke out between players less than three minutes into the first game. That early brawl, replete with requisite uppercuts and jabs aimed at the temple, set a foreboding tone. Fighting marred too much of hockey’s pandemic return. Just as bad was the way those brawls were extolled on television broadcasts.

The N.H.L.’s advertisement did not feature those fights, but the fact that the league thought that highlighting pain was a good way to promote itself demonstrated its continued embrace of machismo and violence. What the league signaled is that the athletes we should exalt are those who treat pain as something to be stuffed away and ignored, and who are willing to take the hurt and dish the hurt, no matter the cost.

Problem is, the costs are known, and in many cases the costs can lead to a lifetime of debilitating agony and even death.

Hockey is one of the most breathtaking of sports, as the intense double-overtime win by Dallas in Game 5 of the Stanley Cup finals made clear. It does not need fights or the veneration of gruesome injury to make it great.

When is hockey going to grow up and properly address the problem of unmoored violence and the way it deals with suffering?

Make no mistake, the N.H.L. is hardly alone.

In the N.F.L. on Sunday, the Los Angeles Chargers played again without quarterback Tyrod Taylor.

The reason Taylor was not in uniform? Well, first he cracked his ribs while leading his team to victory in the first game of the season. Though badly hobbled, he forged on, expecting to play in the next game.

The Chargers were willing to accommodate. A team doctor tried to inject Taylor with a powerful pain reliever — a practice so common in major sports that, for decades, players have become addicted to such drugs. Only in this case, the doctor mistakenly plunged a needle into Taylor’s lungs. He ended up in the hospital; it is unclear when he will play again.

Particularly damning is the way Taylor’s story has been discussed by coaches, reporters, players and fans. The focus has almost entirely been on the doctor’s error.

Little has been said about the deeper, more troubling part of this case: the reliance on numbing drugs that allow athletes to take to the field for our entertainment.

Where is the skepticism? Why has medicalized drug use of this kind been so normalized?

As the Stanley Cup finals got underway, the Canadian sports television network TSN aired a documentary, “The Problem of Pain,” that shined a light on anti-inflammatory drug abuse in hockey. In it, former N.H.L. stars open up about the brutality of a sport in which brawls are still cherished and legitimate body checks feel like car wrecks. A sport in which, according to the ex-players, the use of desensitizing medicine often fuels performance as much as hard work.

“I never wanted to hurt the team, so I knew I had to play,” says a now rueful Ryan Kesler, who played in the league for 15 seasons and had a reputation for sucking up any kind of hurt in order to make it out on the ice. “To play, you have to take painkillers.”

Fans have a part in this. Too many lust for the voyeuristic thrill of watching violence without considering the costs.

“What fans get out of suffering in sports is meaning,” said Nathan Kalman-Lamb, a Duke University lecturer who has written extensively about the interplay of injury, suffering and sport. “The meaning fans get is based on the idea that when they watch these games something really profound, powerful and important is happening — and life or death stakes are part of it.”

“The harm has become the thing,” Kalman-Lamb said when we spoke this week. “It is not just a byproduct. It is stuck at the very center of so many of our sports.”

The harm has become the thing.

Suffering as spectacle. Torment as tonic. Writhing agony used as bait for viewers.

Think of what that says about our society, particularly now, as we grapple with how to calm a world so prone to violence, so deadened to suffering, so on edge. 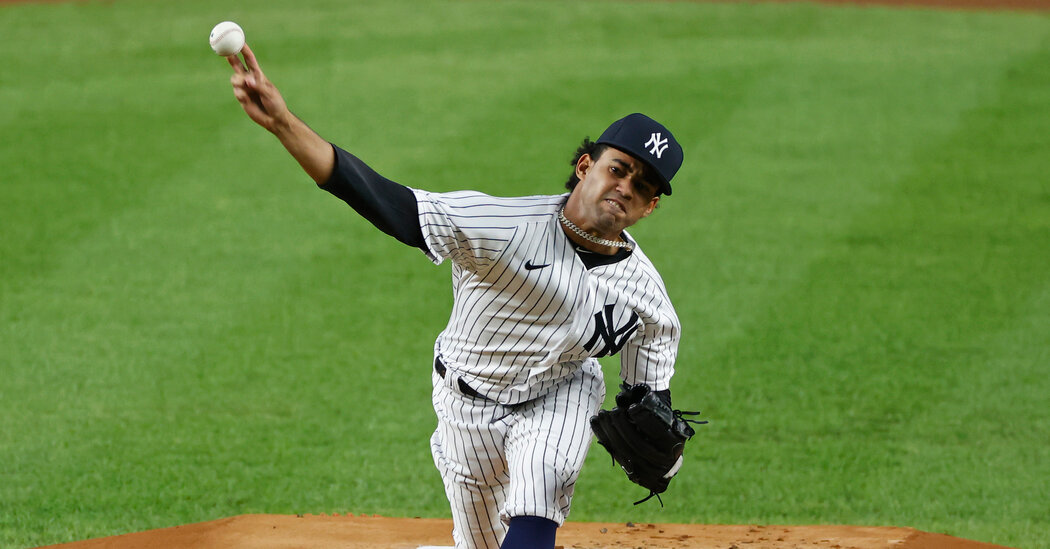 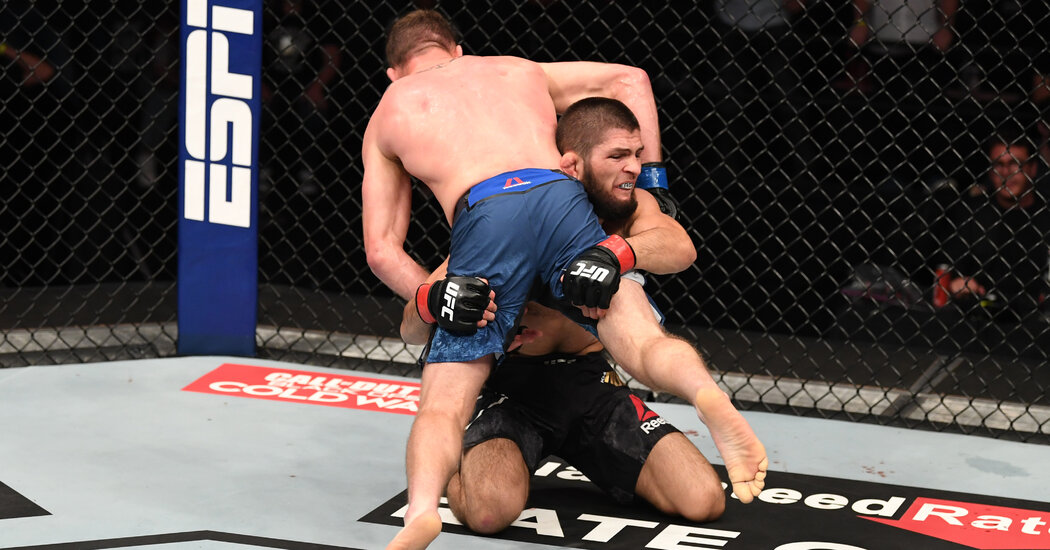 Nurmagomedov announced his U.F.C. retirement in the octagon after defending his lightweight title. 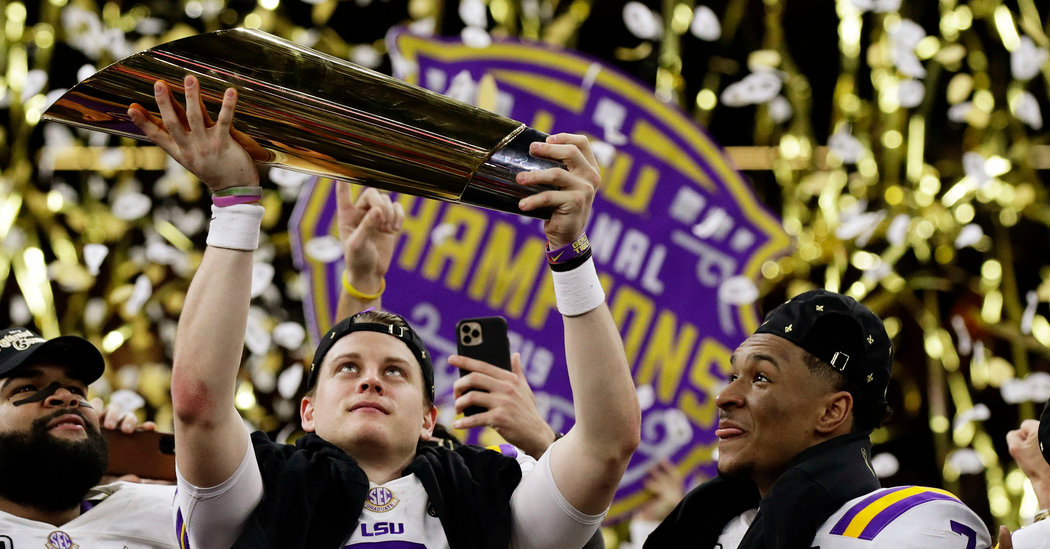 L.S.U. Wins the Title the Way It Won All Season: Behind Joe Burrow

A Malaria Mystery, Partly Solved: What Happens When the Rains End?